Situated just 15 km from Beijing, the 270 year-old Summer Palace of the Qing emperors is the largest and most well preserved royal garden in China. Its 290 ha contain a lake and a hill incorporating the Fengshui notion of ‘Mountain’ and ‘Water’ and over 3000 pavilions, towers, bridges and corridors

When the Palace was first constructed in 1750 to celebrate the birthday of Emperor Qianlong’s mother, it was named The Garden of Clear Ripples. It was burned down during the rampages of Anglo-French forces in 1869 but was rebuilt in 1888 by Empress Dowager Cixi and renamed The Summer Palace. The gardens were opened to the public in 1914 and declared a UNESCO World Heritage Site in 1998. It remains one of the top tourist sites in Beijing.

You could be forgiven if you rushed past the East Gate as most visitors seem to do even though itt is the front entrance to the Summer Palace. It has two side doors for royal family members and court officials, and three grand doors in the middle, exclusively for the Emperor, Empress and queen mother. Two bronze lions crouch on white marble pedestals on either side of the gate.

The first architectural complex one sees after the East Gate is the Emperor’s administrative hall – The Hall of Benevolence and Longevity. It is supposed to contain a throne with nine dragons and a red sandalwood screen. Empress Dowager Cixi  is said to have managed the affairs of court unseen from behind the screen. In the courtyard in front of the Hall, there is a bronze sculpture of a mythical beast called a Kylin, with a dragon head, lion tail, deer horn, and cattle hooves. It is supposed to guard the Hall against destruction by fire. 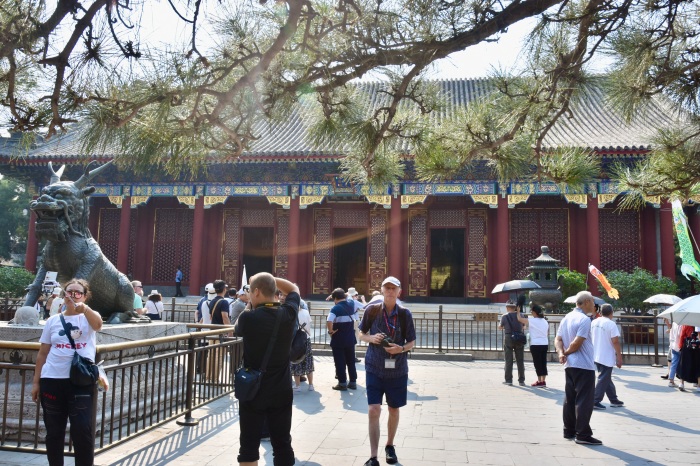 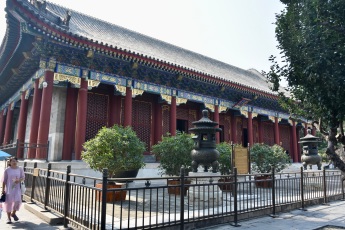 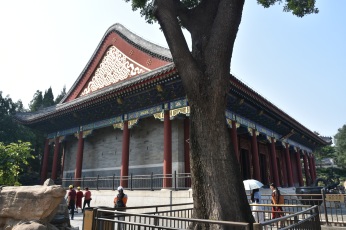 The Garden of Virtue and Harmony where the Emperor and Empress watched performances of the Peking opera is north of the Hall of Benevolence and Longevity. To the east of the Garden is the Hall of Jade Ripples – the living quarters of the Emperor, surrounded by shady courtyards. After the failure of the Reform Movement in China in 1898, Emperor Guangxu, who advocated reform, was put under house arrest here by Empress Dowager Cixi and was confined to the Hall of Jade Ripples. 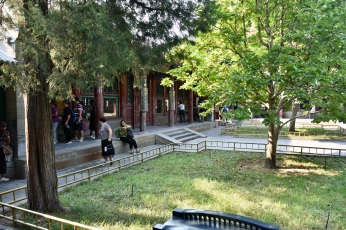 The Hall of Jade Ripples

Longevity Hill, standing beside Kunming Lake  is 58.59 meters high and the Tower of Buddhist Incense, stands in the centre of it. The three floor octagonal tower sits on a 20-meter high stone base and is visible across the lake. It is possible walk up the hill to visit the Tower and other associated structures.

The 728 metre, exquisitely painted wooden Long Corridor stretches from east to the west, between the southern foot of Longevity Hill and parallel to Kunming Lake like a ribbon. Emperor Qianlong built the Corridor in 1750 for his mother so that she could walk out doors regardless of the weather and view the garden. 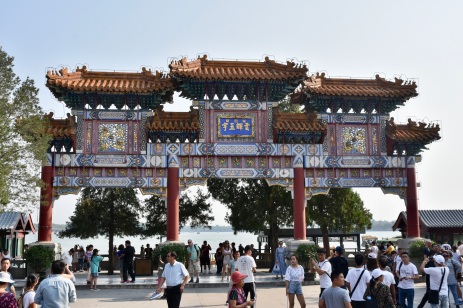 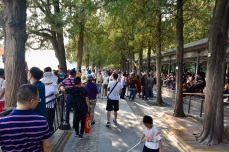 The static Marble Boat is at the end of the Long Corridor in the northwest corner of Kunming Lake. The stone base of the boat built in 1755 first supported a wooden pavilion in traditional Chinese boat-building style. In 1860, fire destroyed the wooden pavilion and Empress Dowager Cixi had the boat rebuilt in 1893 using a Western design.

It is possible to take a short boat ride from the Marble Boat to Nanhu Island, the largest of the three islands of Kunming Lake and get back to the East Causeway of the Lake by the Seventeen-Arch Bridge. There are also ferry ships from the island to the southeast and northwest shores of the lake. You could walk back along the East Causeway to the East Gate past the Double Culvert Water Gate that controlled water level in the eastern section of the lake and the Wenchang Tower, the largest of the six gate forts in the Summer Palace Garden. 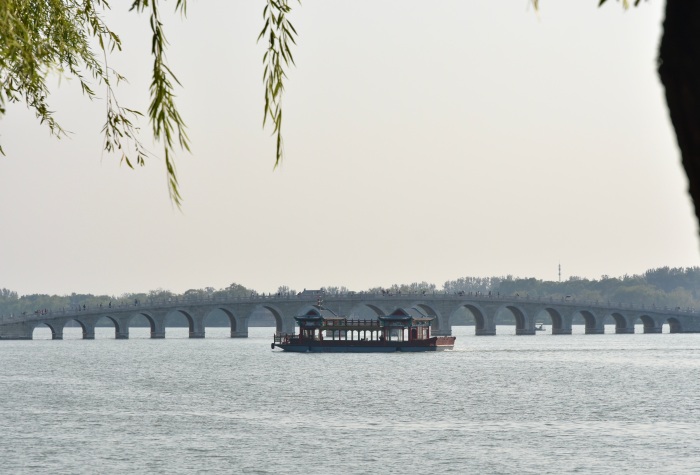 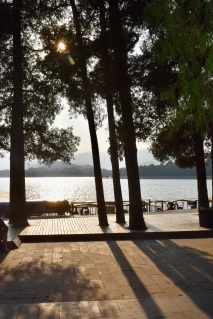 (The visit to the Summer Palace in September 2019 was arranged by Wendy Wu Tours. The entrance ticket is 30 Yuan and it gives one a pass to enter the Summer Palace and see most of the attractions within but not all. The walking tour took about three hours)