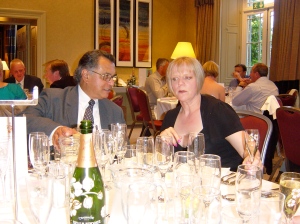 There are many things good about the tasting dinners at Harrogate’s Rudding Park, introduced last August. The idea seemed to be to offer discerning wine lovers an opportunity to drink quality wine with good food at reasonable cost in elegant surroundings. Rudding offered all this and more.

One year on, things have changed, and it is painful to watch. Rudding is still elegant, service is near perfect and quality wines are poured in generous quantities. But the quality of food served is raising eyebrows and at the same time, prices have risen by nearly 40%.

I attended the Perrier-Jouet Evening at Rudding yesterday. Sipping the light, silky champagne from lovely hand painted flutes in the still warm evening sun on the terrace outside the library was wonderful. Bell Epoch 2002 and Vintage 1998 later in the Jupiter Room with dinner were immensely satisfying. Glasses were regularly topped-up by attentive and courteous staff. Helen MacKenzie conducted the evening expertly.

So what is wrong?

The canapés, though plentiful, were more like chunky snacks, rustic and tasteless. Oysters were leathery and gewürztraminer gel was an unwelcome distraction. Poor quality pigeon, inadequately prepared and under cooked was unpleasant and looked suspiciously like an attempt to cut costs. ‘Clotted cream ice cream’ was an inedible mess, and pairing it with Perrier Jouët Blanson Rose was unfortunate. “The worst meal I have had for a long time” one diner said. Casually dressed noisy revelers did not help.

I have had many great evenings at Rudding and would like to think that this was just a one off and it would bounce back in no time. I desperately want it to.

The opposite is unthinkable.

“…we went to the Portuguese dinner and, like you, were pleased with the hosting, the environment, the wine quality/quantity and the service levels. The food, however, was disappointing, with some good, some average and some downright poor elements. We didn’t see anything to change our view that Tom van Zeller is doing the best food in Harrogate…” (27 July)

“…I agree with you that the dinner was not what you would expect from Rudding, particularly the “canapés”.  It was no where near as good as the dinner that they produced  at the beginning of July…” (27 July)