3.5 kms of citadel walls girdle palace complexes with 980 buildings in a 72 hectare royal enclosure where 24 emperors of the Ming and Qing dynasties governed from a closed-off world until the Republic overthrew the last emperor in 1911. This is the Forbidden City of China

We left Tiananmen Square, crossed the road and walked past a row of stiff policemen standing under green parasols towards the Gate of Heavenly Peace of the huge Imperial City Wall upon which Mao’s portrait hangs, to enter the Forbidden City now called the Palace Museum. The Meridian Gate (A), a massive U-shaped portal at the south end of the complex, was once reserved for the emperor alone. Imperial proclamations and almanacs used to be issued from the gate house and after successful campaigns, the Emperor would receive prisoners of war here, sometimes followed by mass decapitations. Today, it is the modern Chinese military that parades in the square. 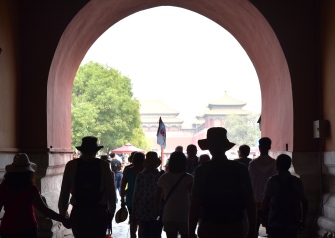 The Forbidden City is divided into two parts. The Outer Court or Front Court  includes the southern sections, and was used for ceremonial purposes. The Inner Court or Back Palace  includes the northern sections, and was the residence of the Emperor and his family. It was also used for day-to-day affairs of state. (The approximate dividing line is shown as a red dash in the plan above.)

Past the Meridian Gate, one  enters a large square, pierced by the meandering Inner Golden Water River, which is crossed by five marble bridges. You can climb the Forbidden City’s Wall just inside and to the east of the Meridian Gate and follow it eastwards to the Corner Tower (E), and then north to the East Prosperity Gate (E). These house the Gallery of Historic Architecture. To the east of the huge courtyard is the Calligraphy and Painting Gallery, housed inside the Hall of Literary Brilliance and to the south is the Furniture Gallery, occupying an area known as the Southern Storehouses. Across to the west is the Ceramics Gallery inside the Hall of Martial Valour, with more than 400 pieces displayed chronologically, dating from 6000 BC. During the Ming dynasty, the hall was where emperors would receive ministers.

Beyond the square stands the Gate of Supreme Harmony (F).

Inside the Ceramics Gallery

The Gate of Supreme Harmony

The Hall of Supreme Harmony (G) is the largest, and rises some 30 metres above the level of the surrounding square. It is the ceremonial centre of imperial power, and the largest surviving wooden structure in China. In the Ming dynasty, the Emperor held court here to discuss affairs of state. During the Qing dynasty, as Emperors held court far more frequently, a less ceremonious location was used instead, and the Hall of Supreme Harmony was only used for ceremonial purposes, such as coronations, investitures, and imperial weddings. Inside the Hall is a richly decorated Dragon Throne, from which the emperor would preside. At the back of the throne is a carved Xumishan, the Buddhist paradise, signifying the throne’s supremacy. Today you can only view it from the outside. 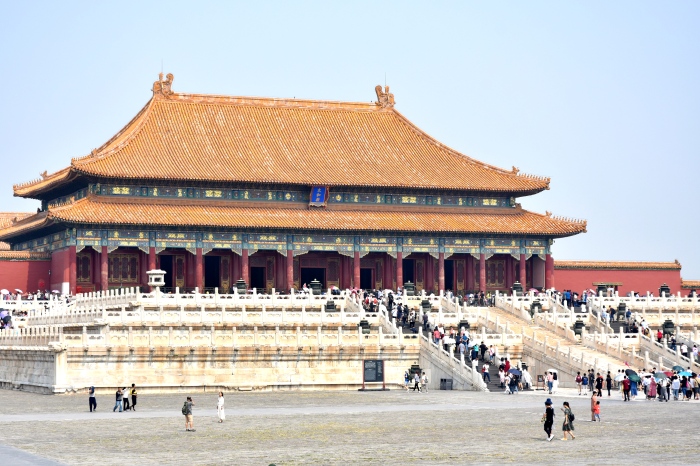 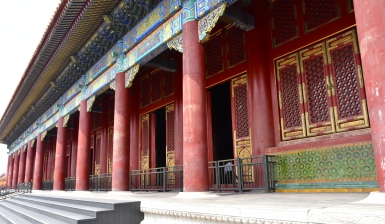 The Hall of Central Harmony is a smaller, square hall, used by the Emperor to prepare and rest before and during ceremonies. Behind it, the Hall of Preserving Harmony, was used for rehearsing ceremonies, and was also the site of the final stage of the Imperial examination. All three halls feature imperial thrones, the largest and most elaborate one being that in the Hall of Supreme Harmony.

The Inner Court, separated from the Outer Court by an oblong courtyard, was the home of the Emperor and his family. In the Qing dynasty, the Emperor lived and worked almost exclusively in the Inner Court, with the Outer Court used only for ceremonial purposes. At the centre of the Inner Court is another set of three halls (L). From the south, these are Palace of Heavenly Purity, Hall of Union and the Palace of Earthly Tranquility. The Emperor, representing Yang and the Heavens, would occupy the Palace of Heavenly Purity. The Empress, representing Yin and the Earth, would occupy the Palace of Earthly Tranquility. In between them was the Hall of Union, where Yin and Yang mixed to produce harmony. 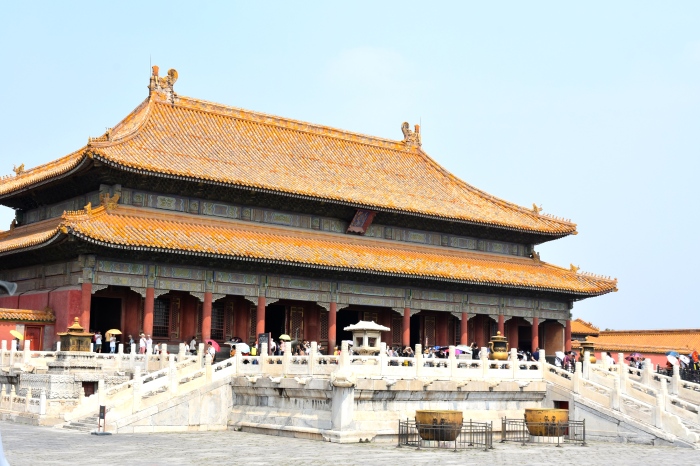 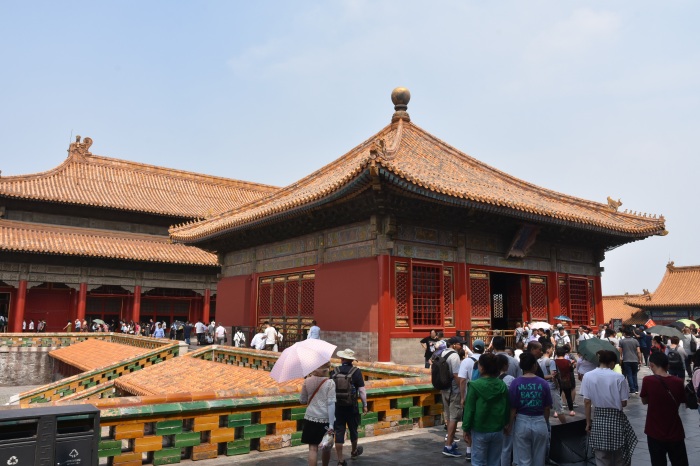 Hall of Union and Palace of Earthly Tranquility

Behind these three halls lies the Imperial Garden (M). To the north of the garden is the Gate of Divine Might through which servants entered the Forbidden City. The small garden is serene and has graceful ancient trees, beautifully decorated marble pavilions and ponds full of goldfish. 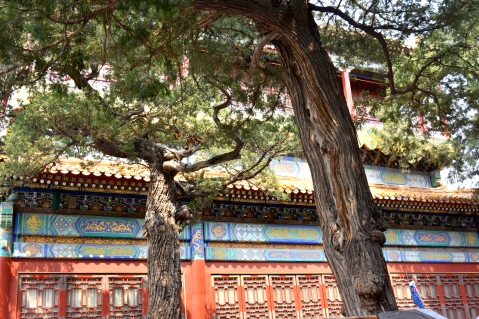 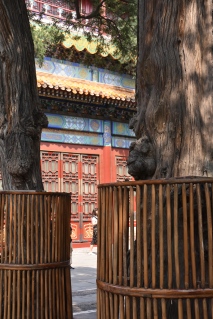 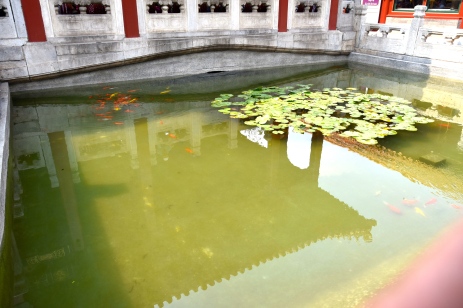 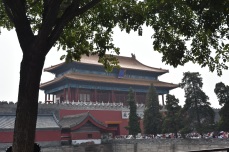 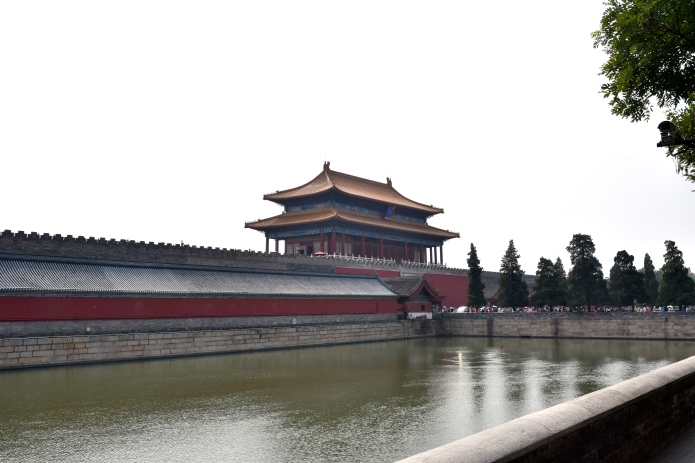 The northern gate, wall and moat

We left the Forbidden City through the northern servants entrance, crossed the moat and walked towards our parked coach. As in Tiananmen Square, the heat was intense and crowds were massive. But the Forbidden City is the most fascinating sight in Beijing.