The road runs through Muthurajawela Wetland, a 3000 ha saline peat bog which is the largest in the country. It was a rice field in the time of ancient kings of Lanka until coastal tides inundated the fields with sea water. In the 18th century, the Dutch constructed a series of dams and canals in an unsuccessful attempt to drain the fields. In 1802, the British built a 14.5 km canal connecting the original Dutch Canal and waterways and named it Hamilton Canal after the then Government Agent of Revenue and Commerce in Ceylon – Gavin Hamilton. Muthrajawela was declared a wetland sanctuary in 1996 and today supports 192 species of flora and 209 species of fauna including 102 bird species. Muthrajawela Visitor Centre runs 90-minute guided boat tours through Hamilton Canal and the wetlands.

Negambo Lagoon adjoining Muthurajawela is a 35 square kilometre shallow lagoon with a maximum depth of 1 meter.

We left the A3 at Katunayaka, skirted the International Airport and drove towards Kurunegala past the historic rock town of Dambadeniya. 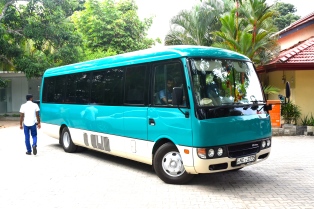 Dambadeniya was the capital of Sri Lanka in the mid 13th century. King Vijayabahu III (1232-36), who was displaced from Polonnaruwa, the then capital of the country, by invaders from India, built a new city with fortifications, a royal palace and a temple for the tooth relic of the Buddha at Dambadeniya. During the reign of King Parakramabahu II (1236–70), Dambadeniya reached the zenith of its glory with the King’s immaculate poetic masterpieces making a turning point in Sinhalese literature.

We stopped for breakfast at Crown Field Hotel in Narammala. The place was being set up for a wedding lunch for 750 guests. The hotel still managed to serve a good Sri Lankan breakfast of string hoppers, boiled rice, excellent freshly baked bread and a selection of not too spicy curries. 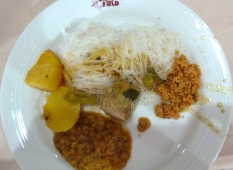 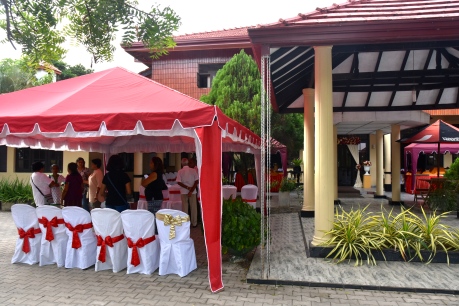 We bypassed Kurunegala, surrounded by coconut plantations, and drove into Anuradhapura – the first capital of Sri Lanka, established in 500 BC. Today it is part of the Cultural Triangle with many historic and religious buildings. As we drove through, I had a glimpse of the two-story railway house where I spent many happy school holidays during the time my father – a railwayman, was stationed in Anuradhapura. 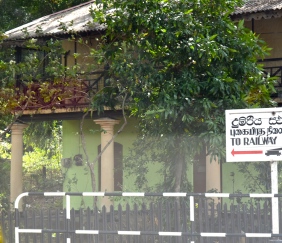 We stopped for mid-morning tea at the smart, open-sided Green Park Restaurant in Anuradhapura. Service was slow, there selection of snacks was poor but the toilets were clean and relatively odour free. 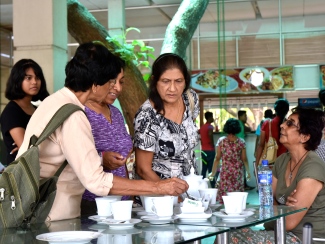 We reached the bustling northern town of Vavuniya in time for lunch at Nelly Star Hotel which again was set up for a wedding reception. A miserable lunch of fried rice with fish and chicken was served in the tacky dinning room. I would give this sad place a wide birth. A simple rice & curry meal at Madawachchiya Rest House would be a better option.

Beyond Vavuniya, the land looks parched and lush green vegetation gives way to scrubland with tall Palmyra Palms. Cattle still roam the busy A9, ignoring the traffic. Gun totting Traffic Police find shady spots to wait like starving vultures to extract bribes from hapless motorists committing minor traffic offenses. You have to surrender your driving license, pay a fine at the nearest post office and then reclaim your license from the police officer. “They are more than willing to take a bribe and let you off the hook” our driver said with knowing smile.

We drove through Omanthai. Thankfully, the annoying Omanthai army checkpoint established during the Civil War in Sri Lanka is no longer there. Together with the military base, it was dismantled in 2015 and the land returned to the rightful owners. 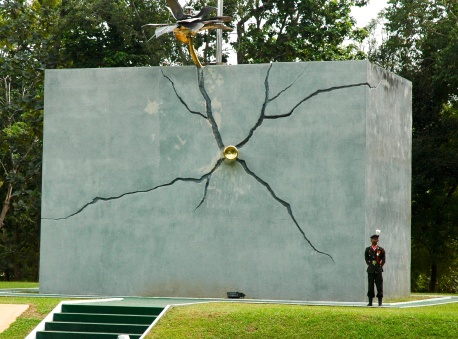 Victory memorial at entrance to Kilinochchi depicting a block of concrete representing Tamil Tigers cracked by a bullet from the Sri Lankan forces. A flower of peace blossoms at the top. (2014) 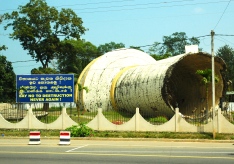 A giant water tank, blown up by Tamil Tigers during the conflict 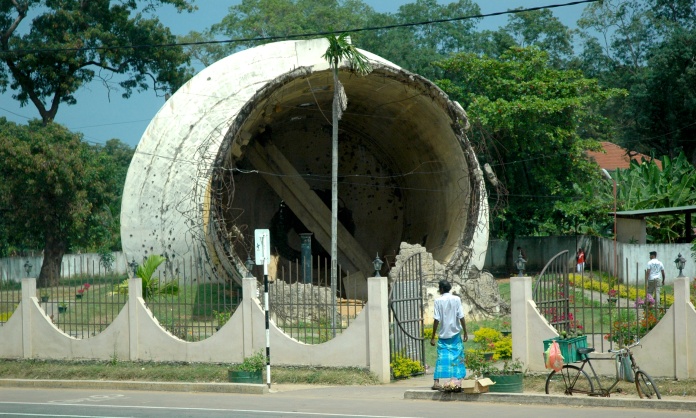 Where ‘s all the water gone?

Iranamadu Irrigation Tank, one of the biggest in Sri Lanka is situated 5 km south-east of Kilinochchi. Originally built in 400 AD by King Dhatusena, it was renovated and upgraded in 1902. During the Civil War in Sri Lanka, Tamil Tigers used the reservoir as a sea-plane base.

Elephant Pass is the causeway spanning the shallow lagoon that separates the Jaffna peninsula from the rest of the island. As the gateway to the Jaffna peninsula, it has been a strategic military base since 1760, when the Portuguese built a fort, which was later rebuilt and garrisoned by the Dutch in 1776. A modern military base was built there in 1952 by the Sri Lankan Army. It was a major battle ground during the Civil War in Sri Lanka. The lagoon used to be the island’s largest saltern producing 60,000 – 80,000 metric tons of salt per annum and supplied 30 to 40% of the total salt requirement of the country.

The lagoon was completely dry and there were no birds to be seen in the adjoining bird sanctuary. We stopped briefly at the war memorial next to the smart new Elephant Pass railway station. The northern line which was destroyed during the Civil War was rebuilt but the trains remain the same. 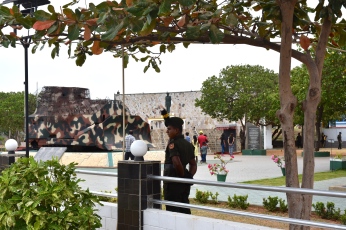 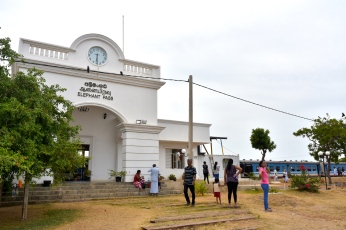 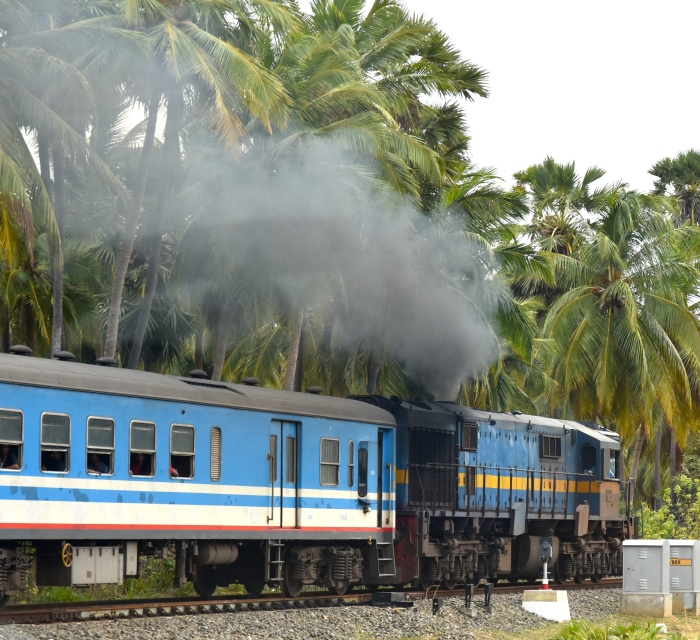 We reached Jaffna at 4.30 in the afternoon and checked in at the Valampuri. The journey with three stops, took 11 hours.

The oil spill on September 8 was the second one to occur at the Muthurajawela facility. However, the Marine Environment Protection Authority says that the environmental damage is minor, and that the clean up operations have gone well. #oilspill #muthurajawela #environment #lka pic.twitter.com/g7KKmuqVTC