The 2015 Cricket World Cup started last week and in the first game, New Zealand thrashed Sri Lanka. People here are in shock. Cricket is almost a religion in Sri Lanka and this small tropical island has produced some of the top cricketers of the world.

The other day I came across an old photograph from the days before Sri Lanka became a Test playing country and a force to be reckoned with . It shows two young cricketers who years later reached stardom – Aravinda de Silva and Roshan Mahanama, when they happened to visit me in Yorkshire during an unofficial cricket tour of England. They had minor medical problems which needed attention and I was delighted to help. Today, Aravinda is a batting legend and Mahatma is a top cricket administrator. Another youngster with them was Arjuna Ranatunga who in 1996 won the World Cricket Cup for Sri Lanka. Today he is a Government Minister. The team was managed by the legendary off spinner Abu Fuard who when saying goodbye to me, suddenly removed the Sri Lanka Cricket Board tie he was wearing and presented it to me with a broad smile!

I have not had any contact with the members of that cricket team since that encounter one summer in England. But I still have Abu Fuard’s tie. 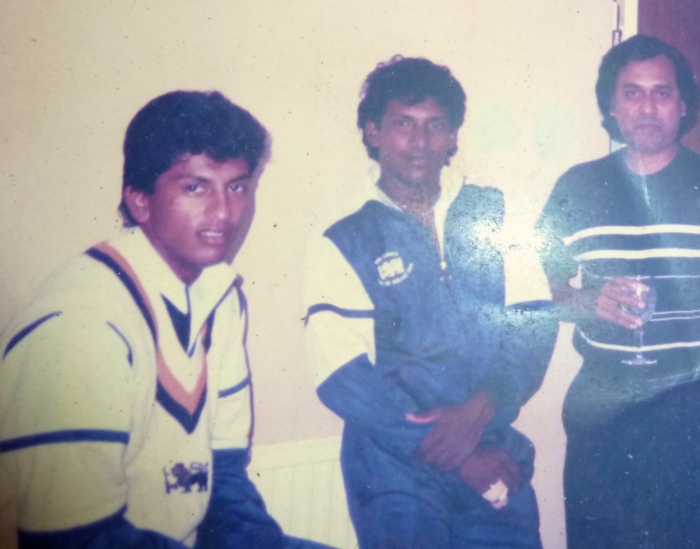 A TALE OF TWO WATCHES

A couple of months ago, the metal strap of my Seiko snapped. The three leading watchmakers in Harrogate said it could not be mended. One even contacted Seiko UK who apparently confirmed this. I had no option but to buy a new watch. Last week, I took the Seiko to a small watch repair shop just outside Colombo. The watchmaker fixed the strap with minimum fuss and charged me the equivalent of £2.25.

This beautiful watch is a gift from a patient some years ago. A leading jeweller in Harrogate asked for £300 to service it. I objected and he reduced the charge to £150. Few days ago, I accidentally dropped the watch and broke its minute hand. I took it to the same shop outside Colombo. The watch was fixed quickly and there was no charge. 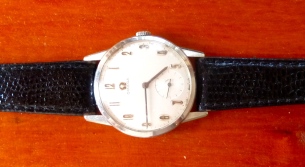 Wadduwa is a small town on the southern coast of Sri Lanka, a short distance from Colombo and net fishing is a daily ritual here. In the early morning, a small boat launches the net about 500 metres out at sea and 12 to 20 men would haul it on to the shore, singing traditional fishermen’s songs laced liberally with four letter words. Often the catch which consists of various small fish, is meager but once I saw an enormous catch of big Yellow Snapper which the fishermen claimed was the biggest they have had in 25 years. These images are from a visit to the sea side last week. 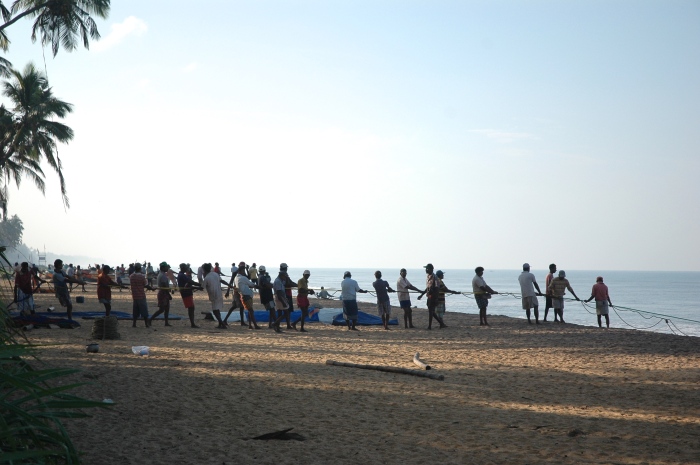 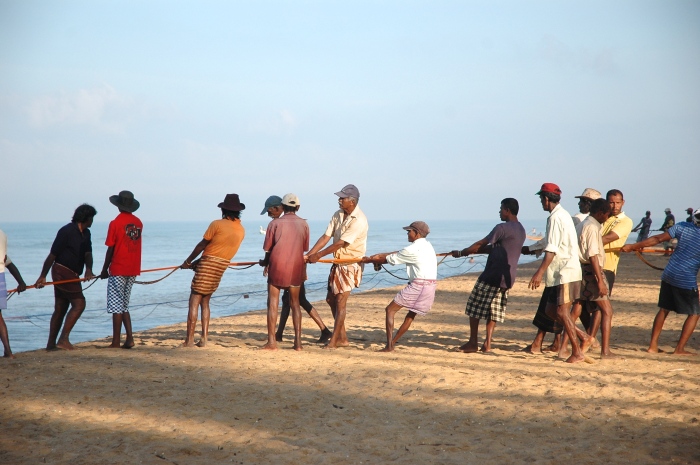 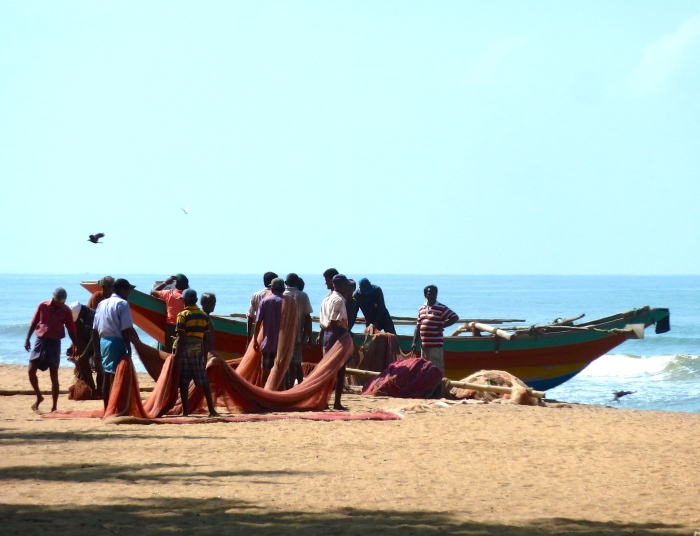 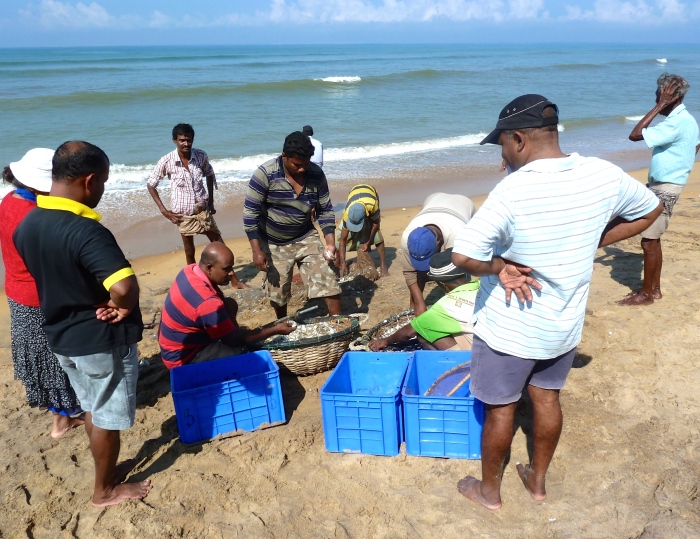 Jellyfish caught in the net – to be returned to the sea

At five hectares, Gall Face Green is the largest open space in Colombo, and stretches for half a kilometre along the coast in the heart of the city. The green was initially laid out by the Dutch in the seventeenth century to provide a clear line of cannon fire against the Portuguese who already occupied parts of the island. Horse racing began in Galle Face in the early 1820s. In 1879, British expatriates started playing golf on the Green and the first official rugby match of Ceylon was played  between the newly formed Colombo Football Club and a rest of the world team the same year. In 1856 the then Governor of British Ceylon began the construction of a 1 mile long promenade along the oceanside of the Green, for ladies and children to saunter and ‘take in the air’.

The ladies and children of Colombo have been doing exactly that for over a hundred years. 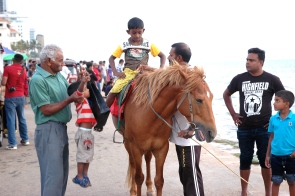 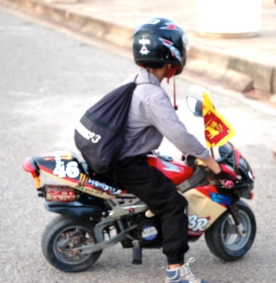 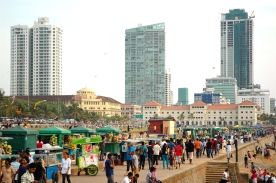 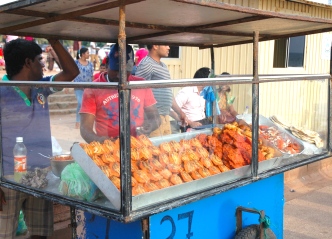 On Pancake Tuesday, I ate Hoppers – Sri Lankan crisp pancakes and “Black Pork” at the Dutch Burgher Union Cafe in Colombo. The Burghers of Sri Lanka are an ethnic group consisting mainly of male-line descendants of European colonists from the 16th to 20th centuries (mostly Portuguese, Dutch, German and British) and local women. The Union has a beautiful, spacious mansion in the heart of Colombo and the attached Cafe serves a selection of local delicacies with a Dutch/Indonesian twist. Franklin Ockers – the Food & Beverages manager gave me a tour of the place including the magnificent Members’ Bar with 100 year old Burmese Teak floors and ceiling. The Union which was founded in 1908 has impressive list of past presidents which includes luminaries such as writers Dr. R. L. Spittle, Brohiers, and Marine Biologist Rodney Jonklas.

This is an oasis of quality and tranquility in a bustling and rapidly changing city. 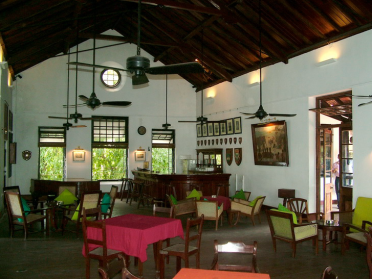 One thought on “Letter From Colombo – Week 4”