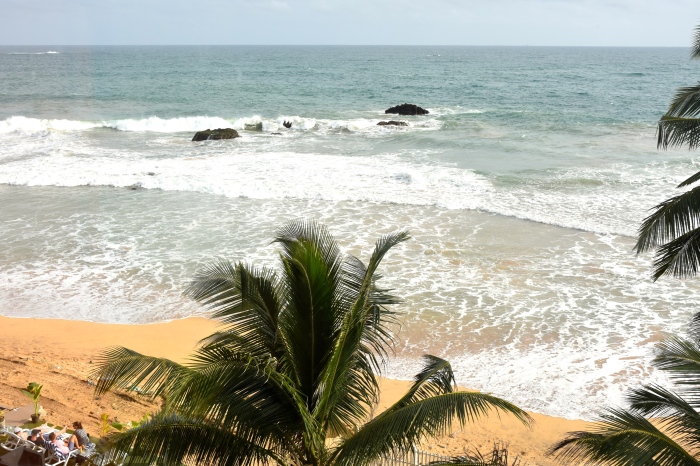 “Welcome to Lavanga” the young woman in a bright green saree said and ushered me in to the dimly lit, book lined ‘library.’ A young man brought me the traditional welcome glass of papaya juice. Two young men took my bags to the  small corner room on the third floor that was going to be home for two days. It was glass-fronted and overlooked the pool and the beach but was windowless. 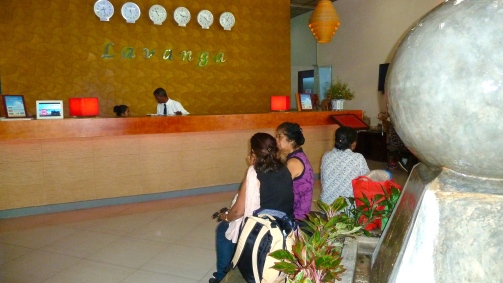 I made myself a cup of tea, changed in to swimming gear and went down to the beach. The south-west monsoon was in full swing and the rough sea had washed away the steps to the beach. A few sand bags were in place where the steps once were and a man was helping a woman to negotiate them. “Be careful, it is very slippery” the man said in Russian. “Are you from Russia” I asked him, also in Russian. “No, we are from the Ukraine” the man said and they both smiled. He didn’t show any surprise that the conversation was in Russian!

I waded in to the choppy sea. “You can’t swim in the sea today, it is too rough” the pool attendant yelled. I couldn’t see a red flag. I shook my head, sighed and climbed back on to the hotel terrace and immersed myself in the empty pool. The pool attendant brought me a black and white beach towel. 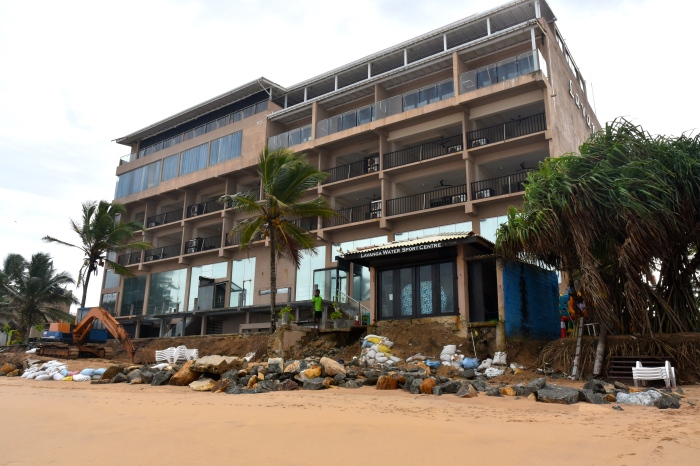 It was hot and stuffy in the bar that evening. I ordered a local beer (Lion, Rs. 850 per 75cl bottle) and looked for a place to drink it in. The pool terrace had a couple of comfortable chairs but two young women were already seated there eating burgers and chips. The library was crowded and noisy. I sat under the fan in a small lounge at the front of the hotel and slipped the Lion.

The hoppers and pork supper was pleasant. Back in my room, there was a smell of something rotten. A search revealed three plates of half eaten, rotting food in one of the cupboards! I slept with the air-conditioner on.

Next morning, I told the manager about the rotting food and lack of ventilation in the room. There was immense embarrassment and profuse apologies followed. My bags were packed and I was moved promptly to a huge luxury room on the second floor. It had a massive balcony with two chairs and an enormous bathroom with an oversized bathtub and a walk-in shower for two.

Next  day, again the sea was too rough for safe swimming. The pool was no fun either and I went to hike in a rainforest instead (see  “Kanneliya – Walk In A Rainforest“). I sipped Scotch & water that evening and listened to fellow travelers playing wonderful golden oldies on the piano in the lobby.

I was astonished to see dead fish on the beach during my walk the following morning. Men and boys were collecting them to take home to cook. “Fish get dizzy in the strong currents and are thrown on the beach by big waves. They are perfectly good to eat” one man explained. Fish get dizzy? I found it hard to accept and found a more plausible explanation in the October 2012 issue of the Sunday Times of Sri Lanka:

“The abundance of fish during the second inter-monsoon between October and end-November, is a common phenomena along the eastern coastal areas of Sri Lanka,” NARA Oceanography Chief, K. Arulananthan said. This is because, during the second inter-monsoon, the cold-waterfront which normally lies offshore gradually comes ashore, while the salinity of the Bay of Bengal, along with its temperature, becomes comparatively low, he explained. The low temperature, low salinity assisted by the passage of the cold-waterfront, create ideal conditions for Algal Bloom, a rapid accumulation of the Algae plant. This plant is involved in photo synthesis for food. The abundance of algae means food for small (pelagic) fish. When the temperature and salinity best suit the fish, normally found offshore, come closer to shore to feed. When swimming towards the shore, these small fish get swept ashore by the waves. Even big fish too, that come to feed on the small fish, get swept ashore by the waves.” 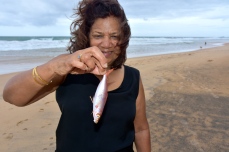 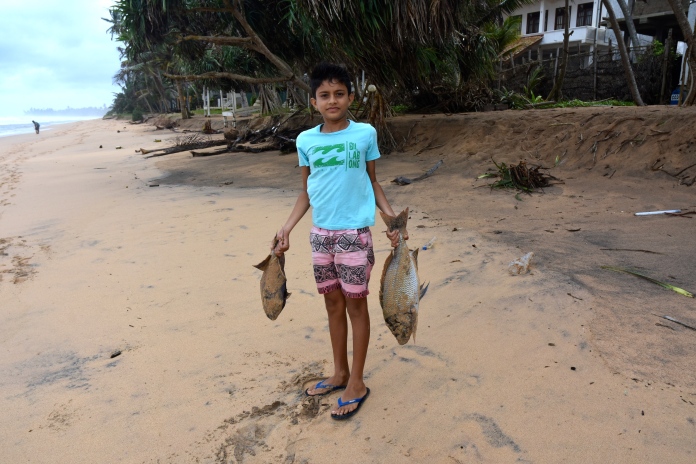 My stay at Lavanga was arranged by Padmini Hussein of Flamingo Tours.