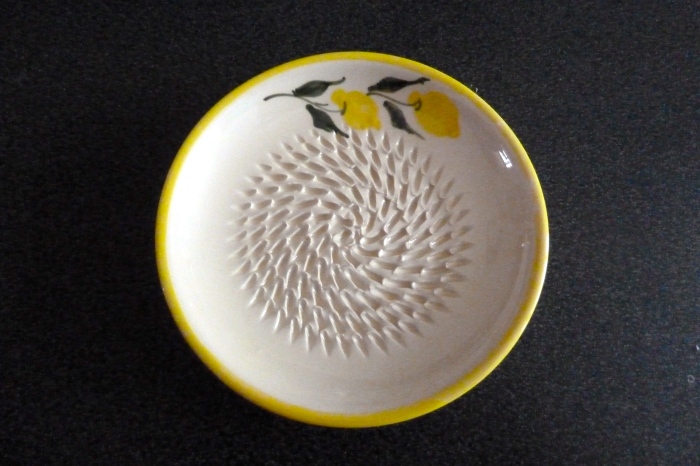 Mi to London was painfully slow. An accident closed lanes and emergency vehicles and an ambulance raced on the hard shoulder. Outside, the wind howled. I stopped to munch sandwiches and drink black coffee from a little flask. In mid-afternoon, London was quiet and the streets had only scanty decorations. In Renu’s flat, we sipped bowls of hot soup and watched T20 cricket from South Africa as dusk gathered.

Supper was simple. A pork tenderloin was cut in to medallions, slightly flattened, a piece of Feta pushed in to a slit in the middle, wrapped in Parma ham and pan fried in a little olive oil with sage leaves. Steamed green beans and florets of broccoli were wrapped in s dressing of crushed garlic, lemon juice and olive oil. Baby potatoes were roasted in their skins with rosemary. The little *garlic grater is magical and skinned cloves whole and delivered perfect garlic paste.

The pork demanded off dry Riesling but a bottle of Nebbiolo di Alba 2003 from Ascheri was uncorked and drunk with relish. It was from a case I bought at the winery some seven years ago and made in the modern style so that you don’t have to wait for an eternity for the wine to come round. A bowl of fresh lychee and mince pies, rich and alcoholic, were consumed. They were very good mince pies and came from Waitrose.

As I went to bed that night, I made a mental note to buy more mince pies and garlic graters for friends back home.